Cooking on a budget is a must these days with almost everyone having to tighten up their purse strings, and I am certainly no exception.  Although my family and I tend to eat more chicken and fish than anything else, we do once in a while enjoy a nice roast beef. The eye roast is my favorite, but again, it is typically a more expensive cut of beef so unless I find it on sale I don’t buy it.  The other day I was in the super market hankering for a good roast and found something called a Bolar roast. The Bolar roast is a blade cut and is considered to be a rather tough cut of beef. After doing a little research on Bolar roast I found that acidic marinades coupled with the method of slow cooking the roast is the best way to go about tenderizing the meat. So I decided to marinade the roast in balsamic vinegar overnight and then cooked it in a slow cooker for 7 ½ hours the next day. The result was one tender piece of meat. It did not come apart in the cooker as I thought it might, instead it was intact and you really didn’t need anything more than a butter knife to cut it! 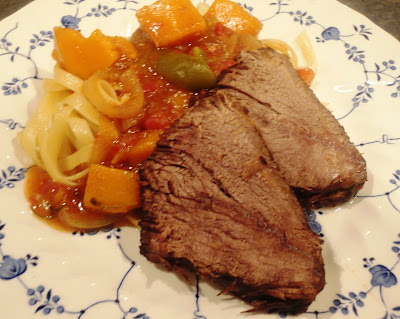 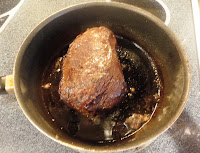 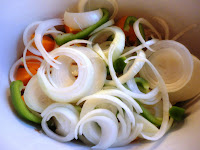 Season the roast with salt and pepper and in a large pot or pan pour the oil in and heat. Once pan is hot place the meat in and brown all sides and then remove from heat. In slow cooker place all the vegetables on the bottom and sprinkle the salt, pepper and curry on top, then put the roast on top of the vegetables and cover with the tomatoes and beef broth.  Set slow cooker on high for 2 hours and then cut it back to low for the remaining time. About an hour before the roast is done take ¼ c. of the broth and blend it with the cornstarch and return to cooker. You can add more cornstarch if you desire a thicker gravy.

After approximately 7 ½ to 8  hours of cooking time remove the roast from slow cooker and let stand for 5 minutes before carving. I served the roast and vegetables over fettuccine noodles but you can also use the extra wide egg noodles as well.

Other variations on this dish can include adding sour cream for creamier gravy or even using a small amount of coconut milk to play off of the curry flavor.