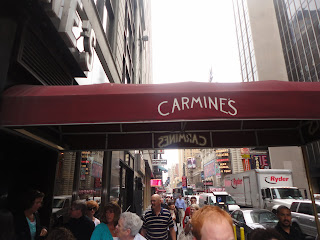 
This past Sunday I had the opportunity to dine in one of New York City theatre district’s most popular restaurants Carmine's. Carmine's is an Italian family style establishment with locations also in Atlantic City and the Bahamas.
Upon entering Carmine’s you may feel as if you have been transported back to the mid twentieth century as the décor is consistent with that period. Music also compliments the feel as you hear the big band tunes playing over the sound system.  Many of the tables in the restaurant are round and able to seat up to 10, perfect for family style dining, and they were covered in traditional white linens. We had a reservation for noon but had arrived about a half hour early. This was no problem for the wait staff as we were seated when all of our party had arrived.
We decided to go with the Sunday pasta special which was a sampling of vegetarian lasagna, manicotti, bolognaise and ravioli. We had the salad which was another of the day's specials and it consisted of baby romaine lettuce and roasted vegetables, ricotta cheese and a homemade creamy Italian dressing. The salad and dressing were so good I actually would have licked the plate if I were in my own home. But what I did was dip the bread which was on the table into the leftover dressing, it really was that good. We also ordered two meat entrees, chicken Marsala and chicken Parmesan. Both chicken entrees had good flavor with the Marsala being my favorite. The meat was very tender in both dishes that you could cut it with a spoon... and we did! The pasta plate was a little overwhelming for me. I honestly only sampled the bolognaise and the ravioli. The bolognaise was excellent while the ravioli were a bit dry and lacking in flavor for my taste. It appeared that the other members of our party enjoyed the lasagna and bolognaise as well.

Service was excellent, absolutely no complaints in this department. Dishes were brought out by several servers all at the same time, water glasses were kept full and our server checked back at comfortable intervals (not absent and not too intrusive) to make sure we had everythign we needed.


As far as cost verses quality of food, well it was well reflected. Carmine’s in the theatre district of Manhattan is a great place to dine before or after a Broadway show. We were able to sit and dine for as long as we wished without being rushed and the food was very enjoyable.
Carmine's receives a solid **** out of 5 stars!!! 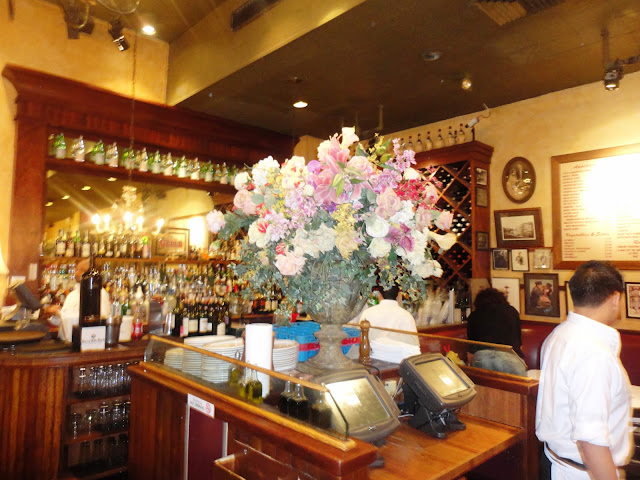 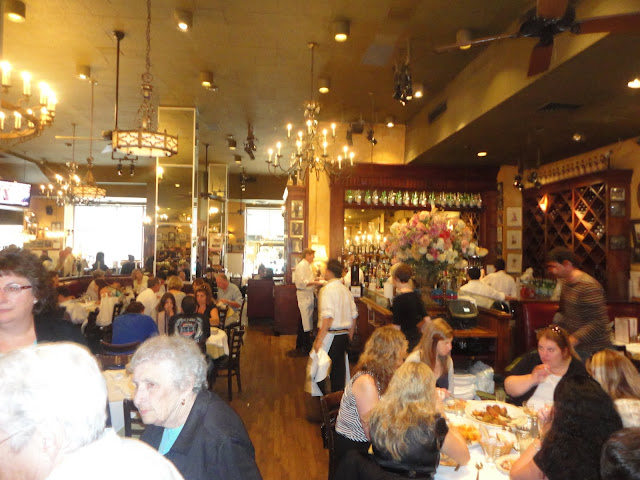