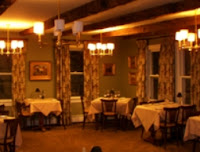 Today I was invited by some dear friends to celebrate a 50th birthday at the Tewksbury Inn in the historic district of Oldwick N.J. The Inn is a lovely old building complete with a front porch and an outside patio which serves as an extra dining area during the warmer months. The interior has an eighteenth century feel keeping the integrity of the time the Inn was built. Service was adequate but not outstanding.

Appetizers ordered today were little neck clams in a white sauce, a smoked salmon with red onion, crème fraiche and dill over a potato pancake and the last appetizer was a goat cheese, walnuts, fruit and honey crostini which you self assemble from the plate. The clams were very good but the white wine sauce was a huge hit for all of us. It was so good in fact that we stopped the waitress from removing the leftover sauce and requested bread for dipping. The smoked salmon was good but what really made this appetizer was the potato pancake it was served on. And the self assemble crostini consisted of a goat cheese ball that appeared to have been breaded and deep fried, fried bread slices for breaking, fresh berries, candied walnuts and honey for topping. I thought this was a very interesting concept as an alternative to serving a straight forward crostini…and I liked it very much.


For my lunch I selected grilled chicken on a rosemary focaccia with brie, walnuts and a cranberry mayonnaise, it was quite enjoyable. As an accompaniment to the sandwich I was served a cole slaw and kettle chips. The slaw had not much in the way of flavor. The handmade kettle chips had a nice flavor however they were not as crisp as I would have liked. But overall the meal was enjoyable and the company I shared it with was excellent.
The prices we a little on the higher side for lunch but not unreasonable and I believe they came fairly close to reflecting the quality of the meals served.  I would recommend the Tewksbury Inn for a pleasant weekend afternoon lunch. And we were very leisurely with the time we spent in the restaurant…we took our time and were never rushed.
Rating….*** ½ out of 5
Posted by Barbara @ 21 Rosemary Lane