Moussaka made with a Yogurt Sauce

I started making this dish long before I ever went to Greece and it is honestly one of my favorite recipes. Moussaka is claimed by the Greeks as their dish, but the Turks were the ones who adopted it and spread it throughout the Islamic world. 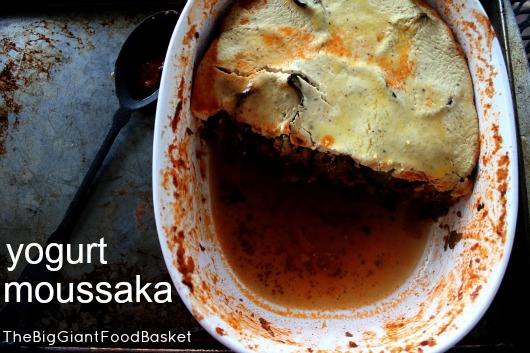 This moussaka is made with the ground meat of your choice (I used turkey) and a yogurt and egg topping which replaces the white sauce of the more traditional moussaka recipe..

I did try the moussaka while I was in Santorini and the version I had there was a little thicker and sweeter than this one. I think it may have been sweeter because cinnamon was the spice used instead of the nutmeg as in this dish.

This recipe is executed in stages so make sure you read through the recipe before tackling this dish.

Place sliced eggplant in to a colander and sprinkle with salt, set aside and prepare the meat.

In a large skillet heat 2 T. of olive oil and saute the ground meat until cooked through. Remove the meat and add the onions to the pan and saute for 3-4 minutes, then go ahead and add the garlic and the parsley and cook for one more minute. Add the meat back to the pan along with the tomatoes and the paste. Blend everything together and lest simmer while you begin to prepare the eggplant.

In another skillet add olive to cover the bottom of the pan and heat. Once oil begins to heat add the sliced eggplant. Be careful that the oil is not too hot or it will spatter when you add the cooler eggplant. Cook eggplant until it begins to brown...you will be doing this in several batches adding more olive oil as you go along. Let eggplant drain on paper towel.

OR
another option to prepare the eggplant.

Place eggplant on jelly roll sheet coasted with olive oil flavored cooking spray.  Spry eggplant as well and then place in broiler. Keep a close eye on the eggplant and watch for it to turn a golden brown, and then flip the slices to broil the other side. remove from pan and let cool. 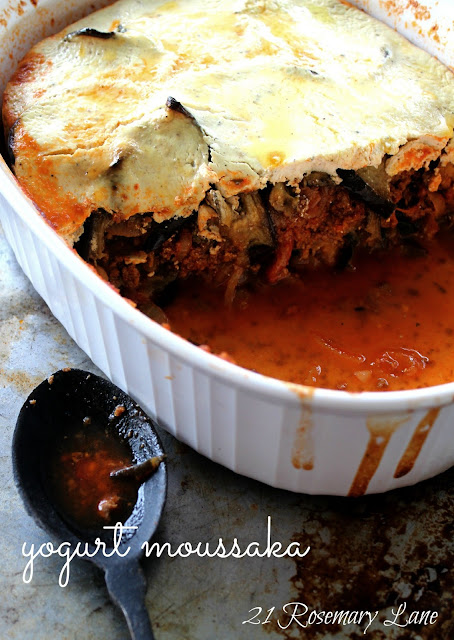 In bowl, whisk together the eggs and add yogurt, whisk again. Then add the Parmesan  lemon juice, nutmeg and salt and pepper and whisk until blended. Top off the eggplant with the yogurt mixture and then sprinkle a little more Parmesan cheese on top.

Place in oven set at 350 degrees and bake for 45 minutes. the dish will be bubbling upon removal from the oven. let set for ten minutes and then cut and serve.

*You can also make this into a vegetarian dish by omitting the meat and adding layers of sauteed mushrooms or zucchini  spinach and possibly slices of Gruyere cheese.