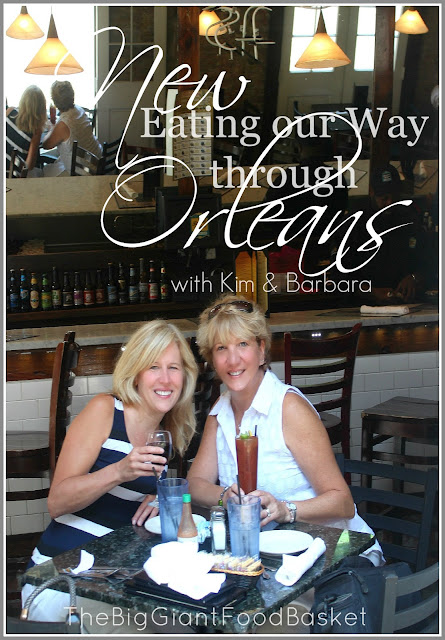 Last weekend my sister Kim and I flew down to the Big Easy for 5 glorious days. While Kim did have work obligations, I on the other hand (hehehehe) did not, we still found plenty of time to experience New Orleans fabulous Cajun/Creole cuisine. 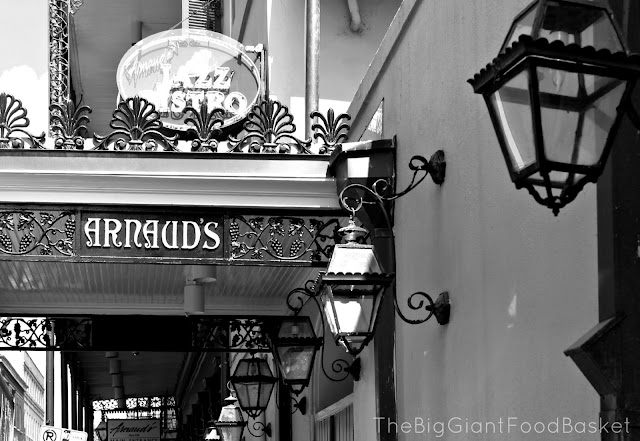 Kim actually had the opportunity through her work to dine on classic Creole cuisine at Aurauds, one of the French Quarter's premier restaurants. 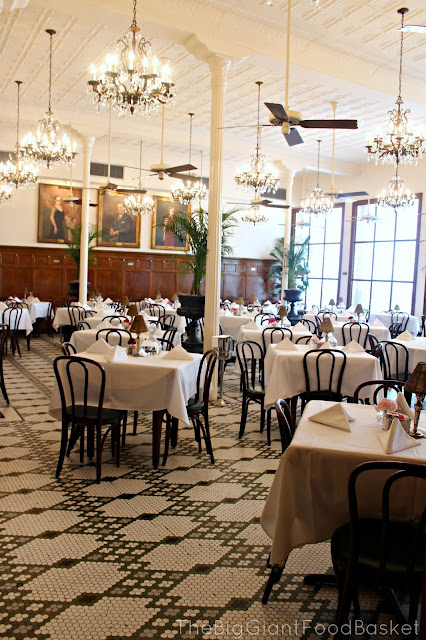 This main dining area is just stunning isn't it?? So old-world South. It felt like Scarlet O'Hara could just come whizzing through the room at any moment! 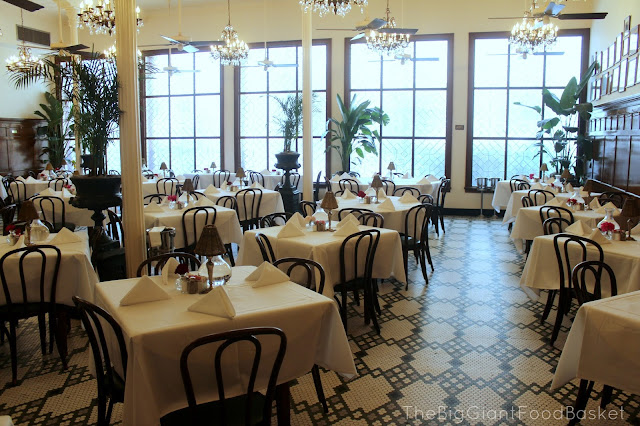 Arnaud's was started by a colorful French wine salesman back in 1918 by the name of Arnaud Cazenave. The food here according to my counterpart Miss Kim, was simply fabulous!!! 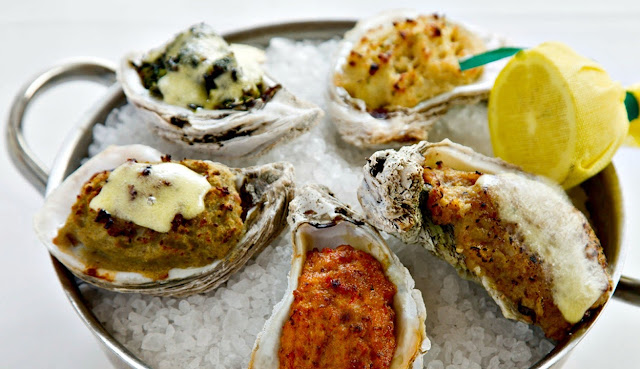 And as it happily turned out, one of our favorite spots to eat was right on Royal Street, just a couple blocks from where we were staying at Hotel Monteleone. Aptly named the Royal House,  it offers open-air dining and classic traditional seafood fare. 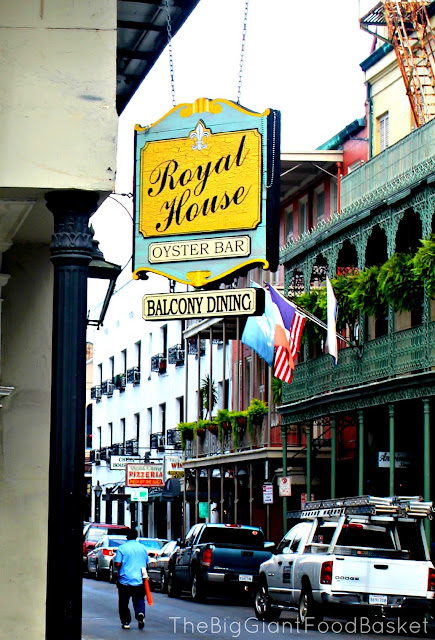 Here we are enjoying an early lunch of oysters...they went perfect with my Cajun Bloody Mary! 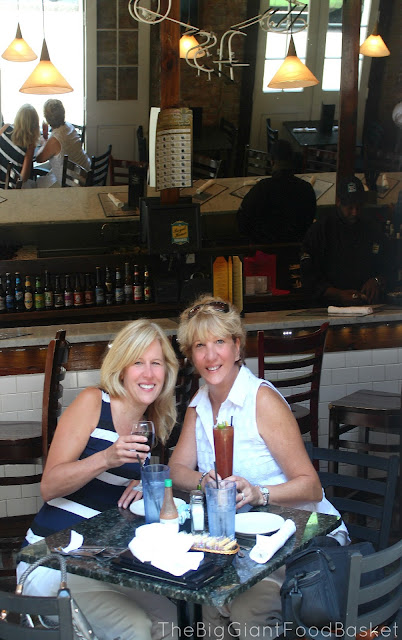 Let me tell you that the Royal House's fresh shucked oysters were unbelievably plump and delicious! The price for the dozen was very reasonable...12 oysters for a mere $13. Can't beat that on a half-shell! 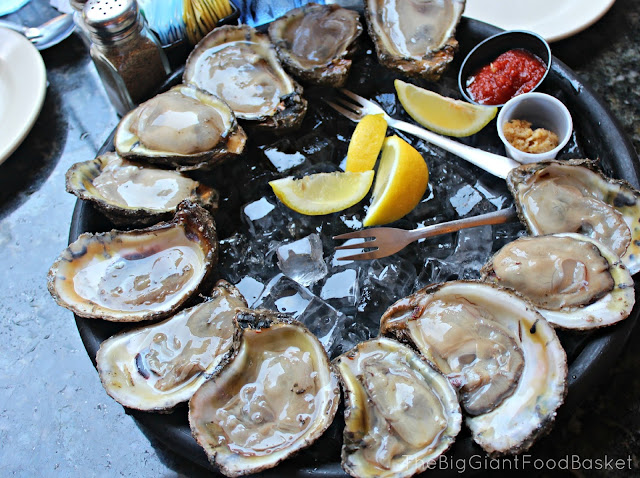 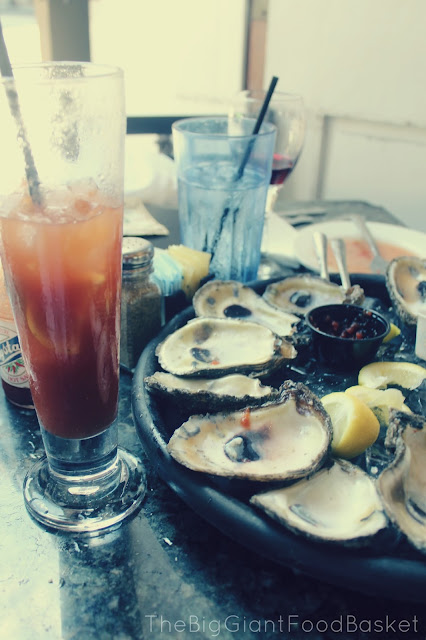 I had even stopped in one day for a quick seafood gumbo lunch...service was fast and the gumbo was manifico!! 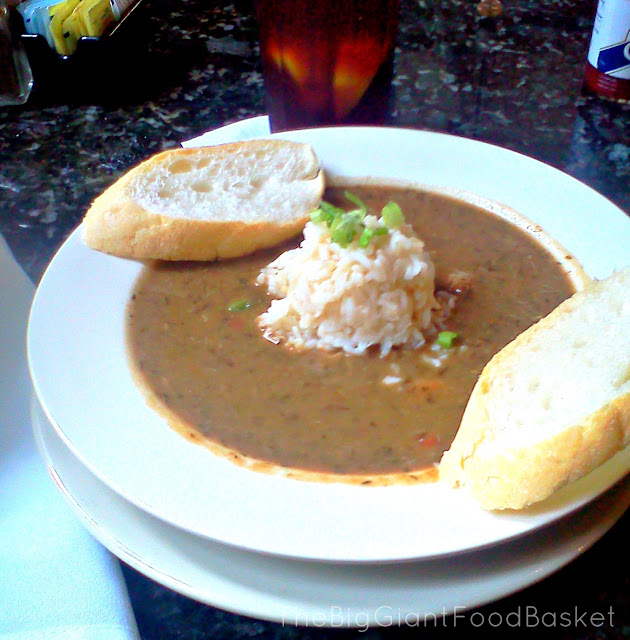 Another cute open air restaurant in the Quarter is Cafe Pontalba located in Jackson-Square. It is fun spot to people-watch while feasting on creole dishes like blacked red fish or shrimp etouffee. 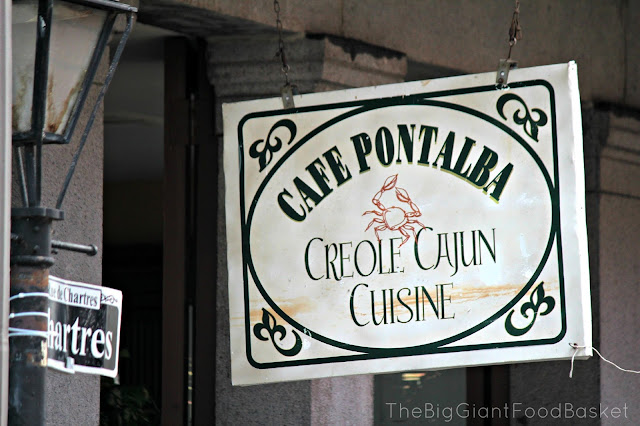 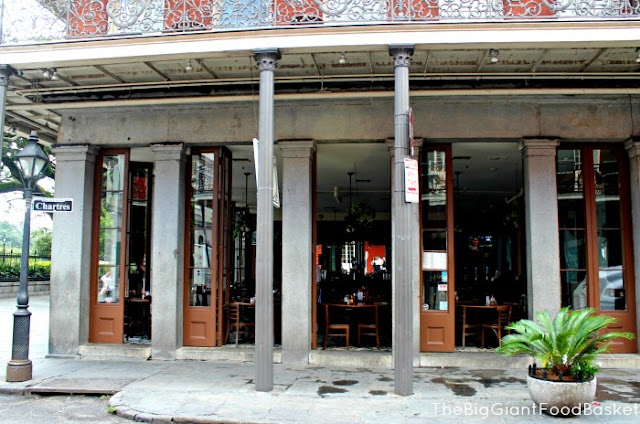 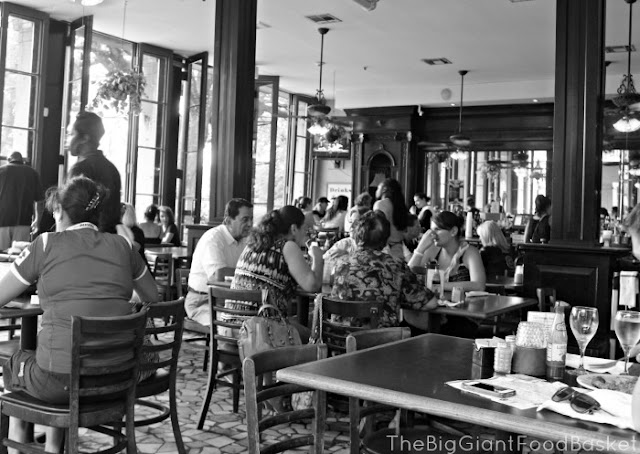 Kim may have dined at Arnaud's but I had the chance to take a cooking class while she was at work. 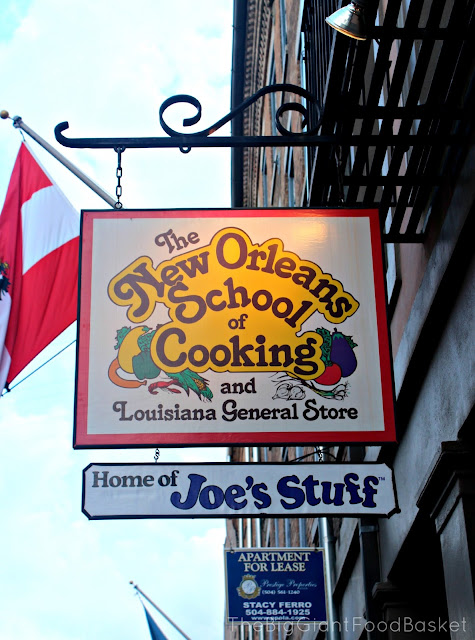 I had stumbled upon the New Orleans's School of Cooking located on St. Louis Street about a block from the Cathedral of St Louis King of France.  For only $29 you get a 2 1/2 hour cooking demonstration on how to make 4 authentic New Orleans dishes. Below is chef Michael...he made an ah-mazing gumbo and jambalaya which we got to eat as part of the lunch included in the demonstration's price! We also got pitchers of Louisiana's Abita beer as a libation. I will tell you more about those recipes in upcoming posts, but let me say for the record in the words of Chef Michael..."it is the best you've ever eaten!" In the same building as the cooking school is a darling general store for all of your Cajun culinary needs. 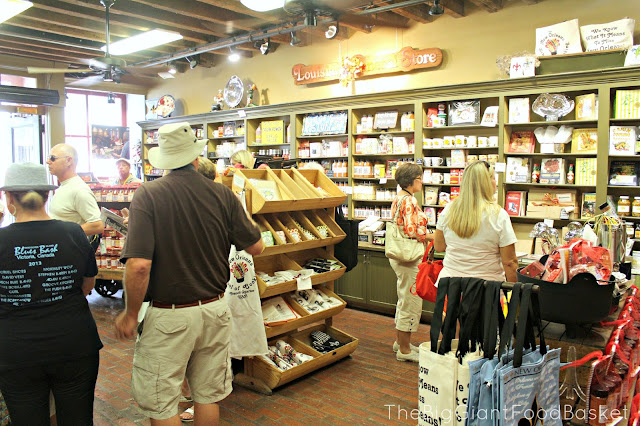 Another place which is a "must go to" while in New Orleans is Cafe du Monde for their famous coffee and biegnets, or French donuts. 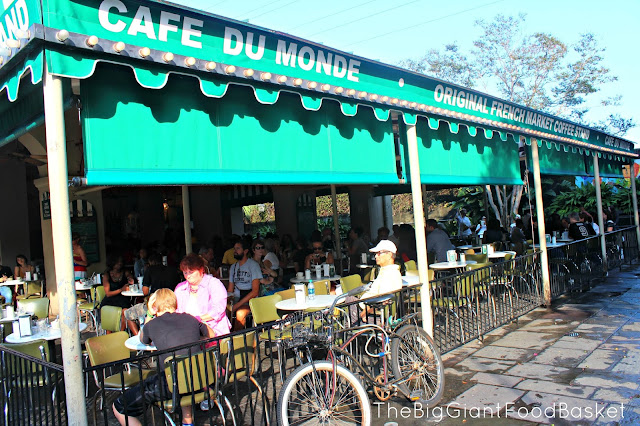 There were a number of wonderful places to eat which made it really hard to chose where to go, even after studying menu after menu for the better part of a day. Also the outside dining areas were incredibly quaint and charming which made it nearly impossible not to feel immersed in the unique culture of the Quarter. 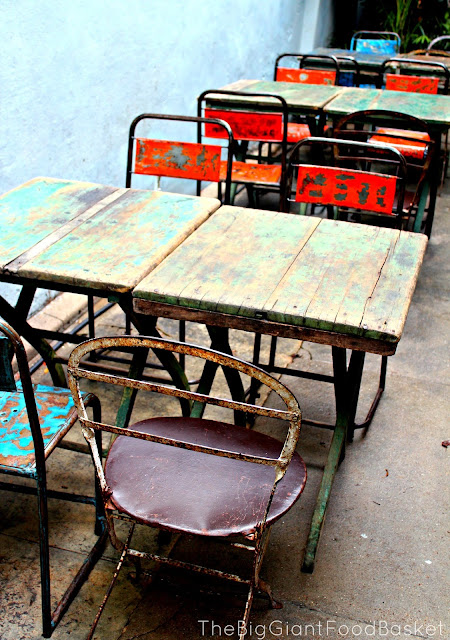 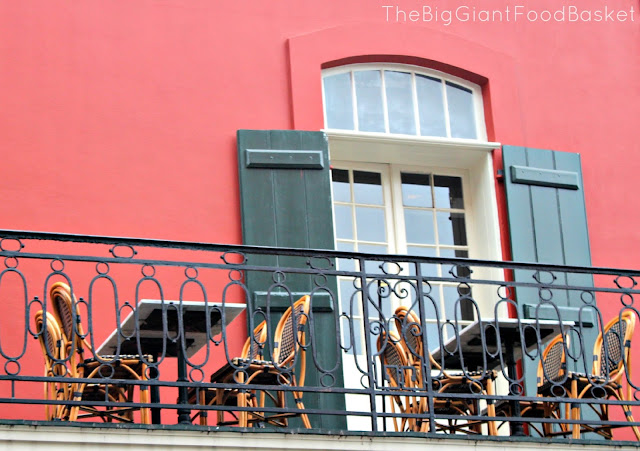 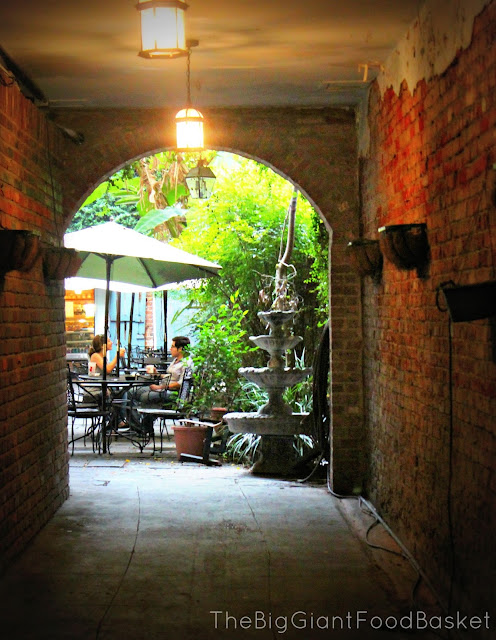 So truth be told, we did not eat our way completely through the city, but given enough time I think we just may have had a shot at completing our quest. Louisiana cooking and New Orleans cuisine is very much tied to its diverse culture. It blends together the flavors and ingredients of the French, Spanish, Portuguese and Native Americans, along with African influences, like no place else in the world.

Someday we'd love to go back to New Orleans and its French Quarter, but until that time I suppose we will have to be happy creating dishes inspired by this colorful southern region in our own kitchens.

Sharing this post at the wonderful blog link parties...
The Jenny Evolution
No Minimalist Here