So last night I attended a "Chili Cook-Off" at my sister’s parish down in Bucks County Pennsylvania. There were 25 submissions in all and both my sister’s and mine were entries numbers 9 and 10 respectively. Being the true critic that he is, my husband Chris decided he was going to take on the challenge of tasting every single chili in the room, and I have to say, there was almost every kind of chili available that you could have possibly wanted to try. To the right of my chili, entry number 11, was a Bison chili which had a gamey flavor as expected but also packed a lot of heat. I liked it despite the fact I don’t really have a taste for the game meats. Down the way a little bit was entry number 14, a Lenten version free of meat only to be replaced by fish. My husband was a big fan of this particular chili, although for me it fell a little short on the heat scale.

My favorite entry, besides my sister’s, was a Moroccan chili full of the spice cumin. I happen to love the flavor of cumin but my husband does not, at least I thought so until last night.
At one point Chris comes over to me with a bowl of chili in hand, points to it all excited and says “Wow, have you tried number five yet?”

“Not yet” I replied as I pulled my sorry ass off the chair it had become so comfortable plopped down in. I headed over to the table, found the fifth entry and picked up the Crockpot lid. As soon as I did I got the whiff of cumin, which I instantly liked. But then I thought, how does Chris like this? He’s always complaining to me “Don’t put so much of that cumin in…it’s not my favorite. Why do you put all that in? See honey you don’t need so much of that spice!” Now completely intrigued by the fact my husband had just raved to me about this particular chili, I went ahead and grabbed a white plastic bowl along with a white plastic spoon and scooped up a little of entry #5 . And as I brought the spoon up to my mouth I thought, my nose is telling me cumin but maybe it’s not as powerful in flavor as what I think I smell.” I tasted it and loved it…BECAUSE IT WAS SEASONED WITH LOADS OF CUMIN!

Now all the entries at the cook-off had to be submitted with a copy of the recipe used to make each chili, so at the end of the night Chris had gone and collected four of the recipes he liked best, brought them over to me, and while stuffing them into my handbag gave me the verbal instruction to “Make these!”  I looked at him and smiled, pulled out the four recipes and began to look through them and what do you know…low and behold there it was…the Moroccan Chili recipe! I laughed to myself as I started to read down the list of ingredients because one of the first ingredients listed was…yep, you guessed it…there, third one down right after the meat and tomatoes...2 tablespoons of ground cumin!! 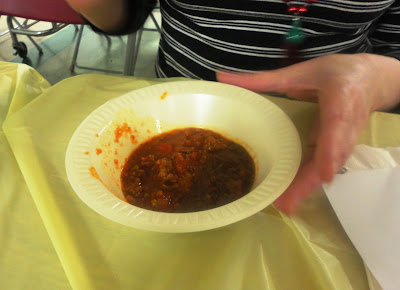 Method:
First heat the oil in a pot and then sauté the peppers and onions in the oil until they are soft, about 6 minutes. Add the ground meat and cook until browned. Then add the tomatoes, Goya packets, spices, worcester sauce and paste and then let simmer for 30 minutes. At the end of the simmer add the liquid smoke and the kidney beans. Heat through and serve. BUT…if you want to make this recipe a day ahead it will have the chance for the flavors to blend. You can add a little more liquid smoke before you re-fire the chili…Garnish with sharp cheddar and sour cream…delicious!!!
Keep in mind that this recipe could probably serve 12 people with a little left over.
*To Taste!!! 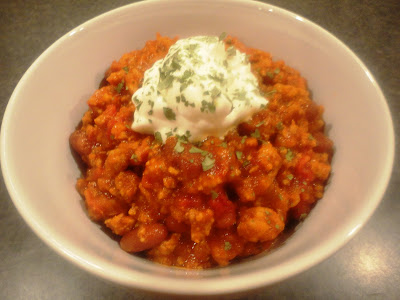