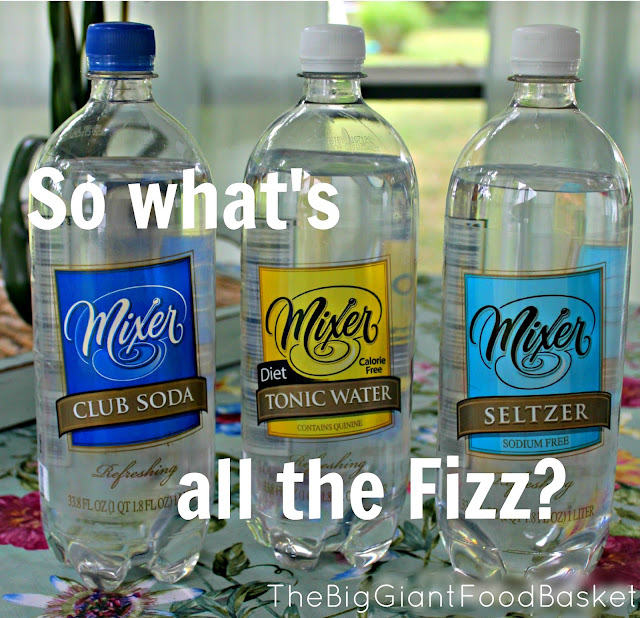 Do you ever wonder what the difference is between these three clear fizzy beverages? Well I've always been curious. What do you use and when? Why do some people prefer Seltzer over club soda or tonic. How alike or different are they and which one came first?

To start, carbonated water goes back as far as the late 1700's. Tonic water, also known as quinine water, is a carbonated drink which contains c02, sugar and has something called quinine dissolved into it. Quinine is a crystal alkaloid which comes from the bark of the Cinchona tree, indigenous to South America, and possesses both anti-inflammatory and fever-reducing properties.

(Good to know if you ever run out of Motrin.)

Anyhow, back in the early part of the 1800's  quinine was added to the carbonated drink as a prophylactic measure to fight malaria, however it also rendered a bit of a "bitey" taste to it. So in an effort to offset the bitterness, sugar was added and later on gin in order to make the drink more palatable.

Tonic water is the only one of the three beverages which has calories, but fortunately for those of us who have to watch our waistlines,  you can buy a diet version of tonic water.

Tonic water is best used with gin or vodka. If you add lemon or lime to the water it is known as bitter lemon or bitter lime.

Seltzer is a flavorless naturally effervescent water with no sugar or sodium added. The term Seltzer is actually a generic trade name for carbonated water. It came about in the 1950's when other terms like sparkling water became popular alternative names for carbonated water. The name Seltzer was derived from the German town of Nieder Selters, which is renowned for it's mineral springs.

Hand made Seltzer is often called soda water, and was introduced back in the late 1800's. This makes the original Seltzer the forerunner to today's soda pop.

Carbonated water or Club Soda, is really nothing more than water into which c02 gas under pressure has been dissolved.

Up until WWII, club soda was called soda water because of the sodium salts it contained. These were added to the carbonated water to mimic the flavor of natural mineral water. The flavor and effervescence of club soda is much milder than that of Seltzer and tonic waters. Of the three different carbonated waters, club soda contains the most milligrams of salt, a whopping 70 mg per 8 oz. serving. Club soda is also the defining ingredient of carbonated soft drinks.

So bottom line...Seltzer and club Soda are virtually interchangeable. But if you happen to run out of tonic water and still have either Seltzer or club Soda lying around, you can make a good substitute by simply adding some lime and lemon juice along with a little sugar to it.

And yes we did conduct out own taste test. Grace and myself liked the tonic water best mostly because of the bright citrus flavor. Michael, on the other hand, preferred the club soda because it was less fizzy than the other two.

I hope this helps a little the next time you are faced with the dilemma of which type of sparkling water to buy!

Wishing you a wonderful weekend!