The definition of Goulash according to Wikipedia the on-line dictionary.

But to me it's still stew! I made this stew by following a clip I found on YouTube on how to make a Traditional Hungarian Goulash. I totally put my faith in this little Hungarian woman as she made her goulash in what appeared to be her own kitchen. So I watched it several times to make sure I got everything right. Actually I have made this goulash twice...the first time I made the mistake of putting too much Hot paprika into recipe and it was really spicy! There is a difference so make sure you read the paprika lable before adding it to the stew! Anyhow, I must say I do like the flavor but I did go ahead and add caraway seed to the dish for just a little twist! 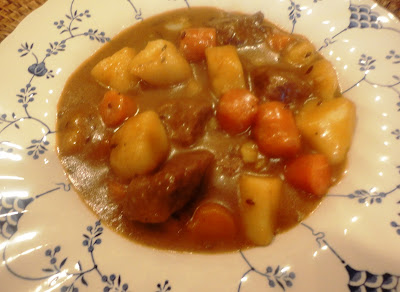 I basically used the same method to make my goulash as in the YouTube clip. The only variations were that I used olive oil instead of canola oil to saute my meat. This is because I prefer olive oil and that was also all I had in the house at the time. And like I said, I added caraway to the dish and i did use beef broth instead of just water.

So heat your oil and dredge your meat and add to the hot oil. Cook until meat is brown on all sides, add the onion and paprika and continue to saute. I then added beef broth and wine to the mix and let it thicken. I tossed in the potatoes and carrots along with the caraway and bay leaf and let it simmer for 1 hour. Remember to remove the bay leaves before serving.

So  if you want to watch this adorable Hungarian grandmother make her goulash, check it out at: